There are just a few sites and PDFs on the Internet that I can find that reference an environmental sound artwork I’ve long loved thinking about, Drive In Music by Max Neuhaus. I never experienced the work first hand. It was an installation somewhere in Buffalo, New York somewhere in the years 1967-1968. I’m not that old and I’ve never been Buffalo, New York.

If you can find other accounts of the work online, let me know. I’m going to re-post some of the text and images I can find here.

The sources below were all first published to the web years back and haven’t been updated recently. In contrast to the content churn on closed and centralized sites like Twitter, there is something great about the web’s ability to host zombie content for years. That said, you never really know when the lights are going to go out on a particular server somewhere in Europe. I’d rather avoid altogether losing any mention of this artwork from the Internet. I’ve liked thinking about it and I’d suspect other folks might like to as well. So, in a small and lazy way, I’m building a little flat file time-bomb shelter on my own site here for the artwork.

I don’t remember exactly where I first read about Drive In Music. It may have been from one of these sites and the product of some random web wandering. It may have been from the “Composition in the Arts” class I took in college at Wesleyan that was taught by Ron Kuivila and Jeffrey Schiff. I took that class over twenty years ago…so…hard to say exactly. 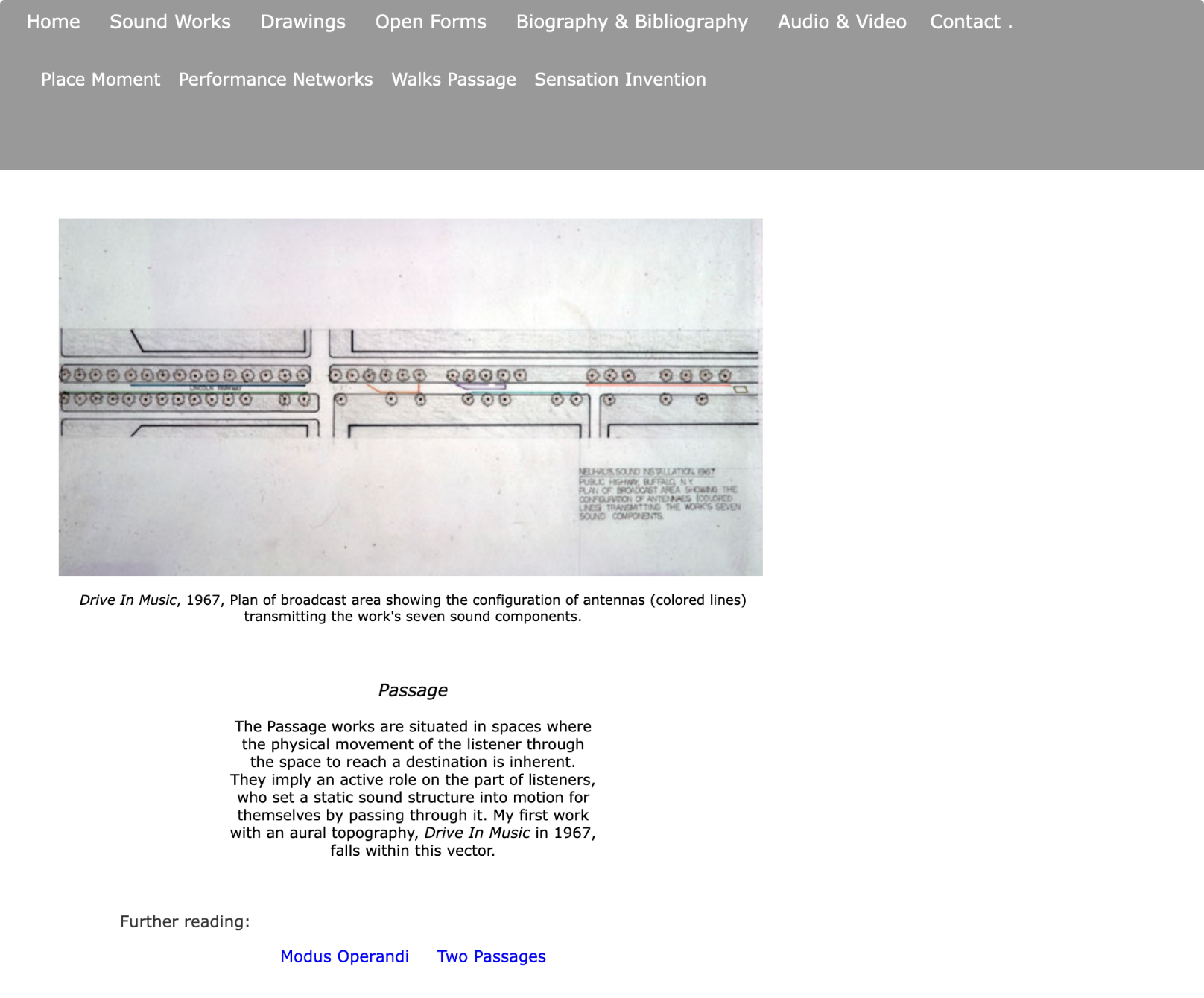 From the site max-neuhaus.estate, which may or may not have a connection to the artist but which looks like a catalog of his projects,

The Passage works are situated in spaces where the physical movement of the listener through the space to reach a destination is inherent. They imply an active role on the part of listeners, who set a static sound structure into motion for themselves by passing through it. My first work with an aural topography, Drive In Music in 1967, falls within this vector.

— From Passage, a page on the site max-neuhaus.estate.

Despite a section for bibliography and sources, it’s not entirely clear to me where this specific text is lifted from. The text seems to be in the first person. Maybe it comes from an artist’s statement about Drive In Music and other pieces Neuhuas grouped under the name “Passage.”

Looking at the citations and the HTML source, the content on max-neuhaus.estate seems to have last been updated around the year 2009. However, I think it used to be served out of max-neuhaus.com. A lazy DNS lookup suggests the site is hosted in Germany and registered in Switzerland. The DNS entries were updated within the last two years. Neuhaus himself passed away in 2009, so I don’t think he is directly paying for DNS registrations and hosting. The contact page additionally cites “Dasha Dekleva, Website Content Design & Archive, 2004-06.” Dasha Dekleva has previously written about sound art and artists. It would more or less make sense to me if this max-neuhaus.estate is the product of archival work done by a curator who previously wrote about Neuhuas.

Anyways the max-neuhaus.estate site includes a generic copyright notice accessible as an iframe from the home page. I am not a lawyer, the jurisdiction isn’t immediately obvious in this statement, I’ve emailed the info@ email address and gotten no response. 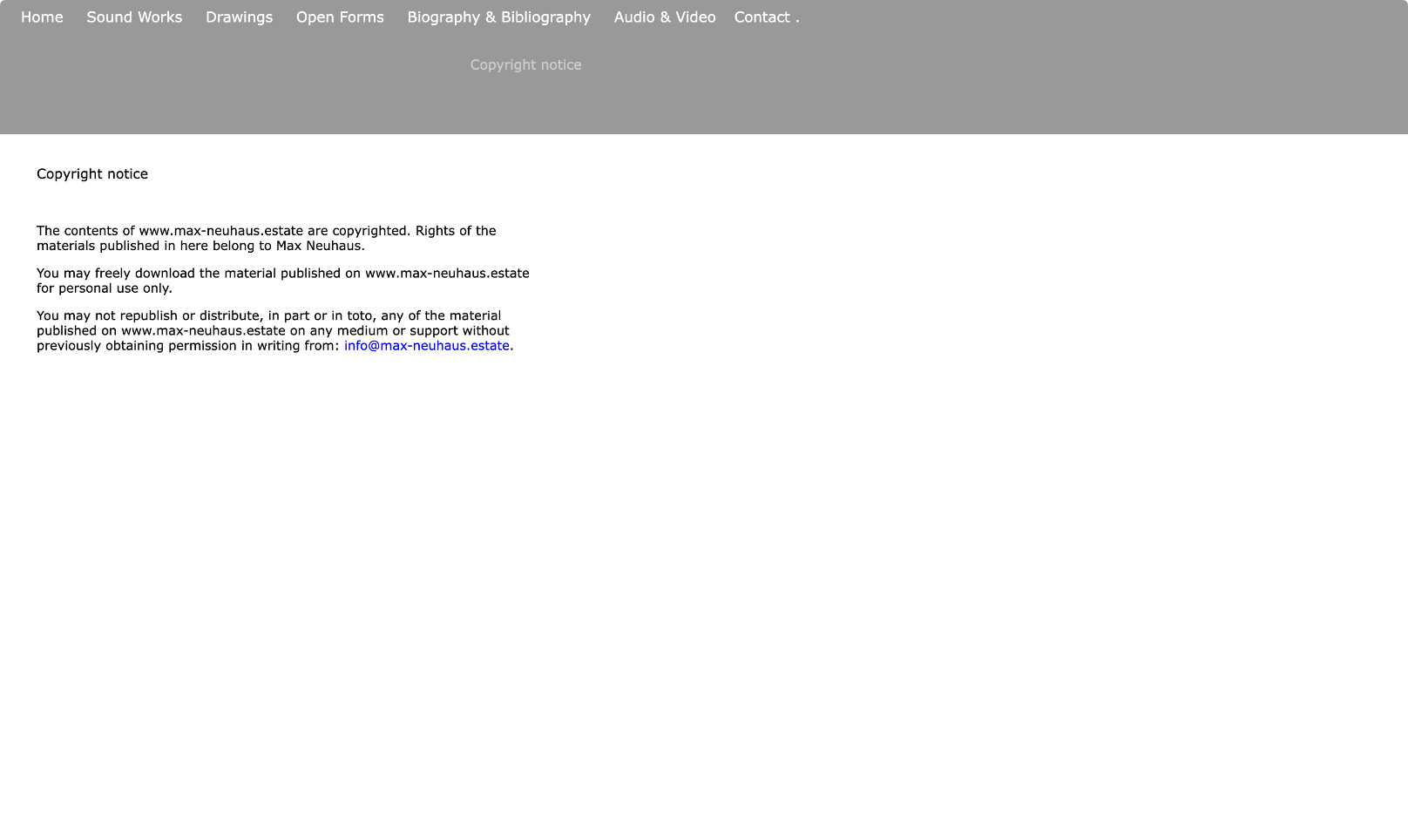 I am also going to do the thing this statement explicitly says I should not do – republish parts of the text about Drive In Music found here (and elsewhere).

(but, like, if folks want to reach out to discuss my liability or about how posthumous server admin fees for artists’ websites are typically managed, please do.)

Ok. That all being said, I think the most important part of the text is that it summarizes the relationship between the physical context of the artwork and the people experiencing it (apologies for my light edit): “listeners … set a static sound structure into motion for themselves by passing through it.” We’ll get in to some of the limited details about the actual structure of the work next, but this simple idea – that the listener/viewer/user is doing the creating for themselves within the environment of the piece – has always been the most interesting part for me.

Here’s an unfortunately small image of a diagram of Drive in Music from max-neuhaus.estate: 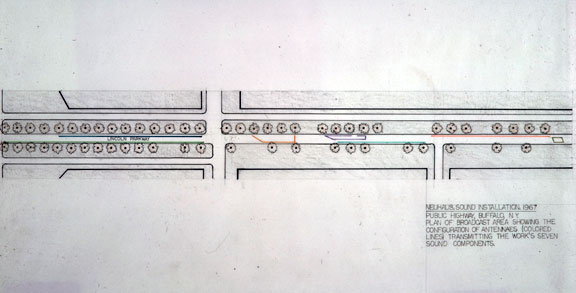 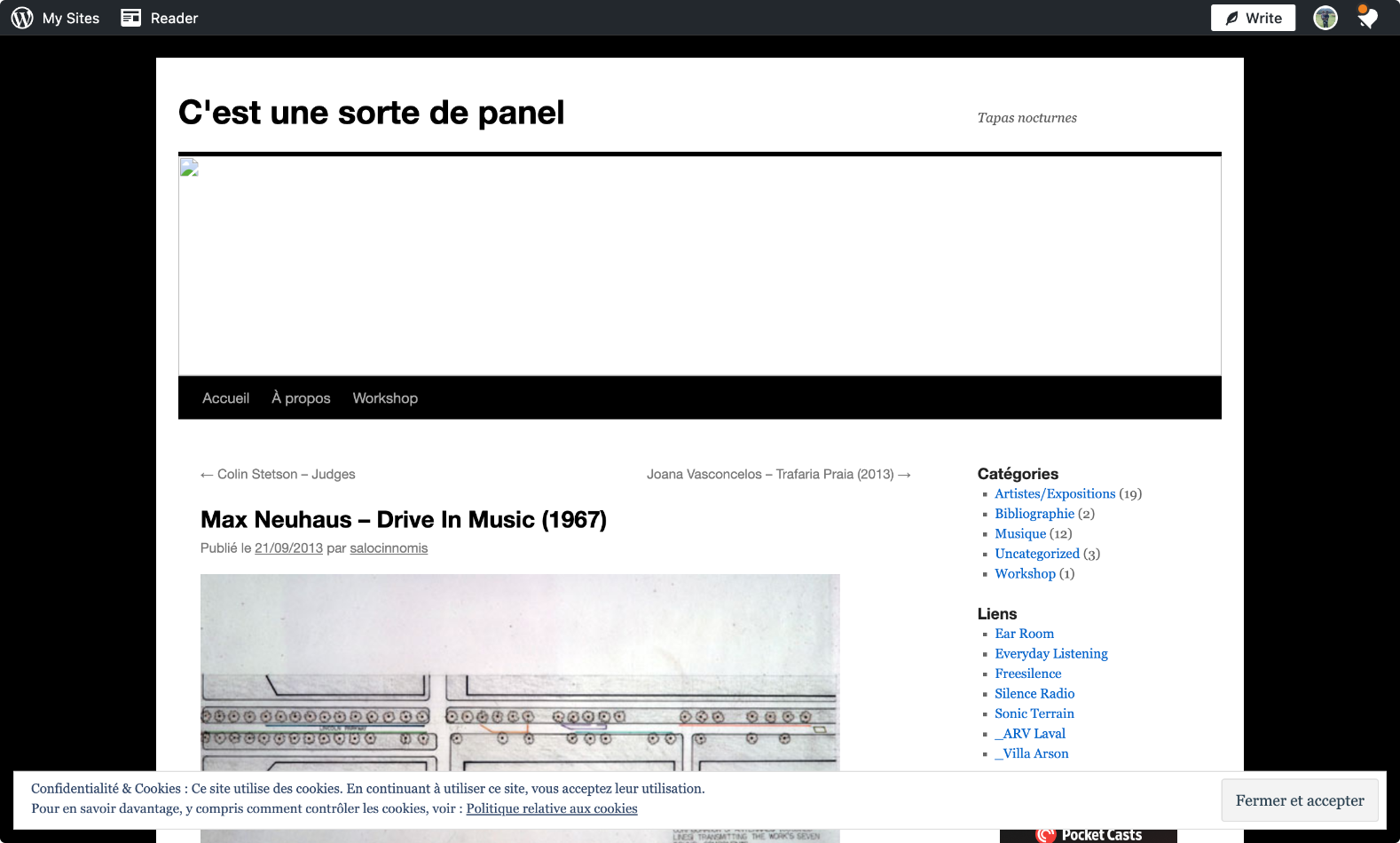 Drive In Music is mentioned on the blog “C’est une sorte de panel.” This blog hasn’t been updated since 2013. The post about Drive In Music begins with the same first-person text I’ve excerpted above from max-neuhaus.estate and then continues with more tangible information about the setup and experience of the piece,

Situated on Lincoln Parkway in Buffalo, the installation consisted of a series of seven radio transmitters located intermittently along a half-mile stretch of the roadway. Each transmitter broadcast a particular frequency, thereby defining a particular area or zone of the roadway by giving it is own sound signature. Listeners could hear the work while driving down the roadway, tuning into the specific radio frequency, each sound mixing and overlapping as one drove through one zone and into the next. Drive In Music existed in the ether, as material picked up by an individual car radio and mixed by the driver’s speed, location, and trajectory. In addition, weather conditions played a crucial factor in the experience and given sound mix, according to the particulars of any given day. “Depending on which direction a driver entered the piece, how far to the left or right side of the road he was, how fast he moved through it, and what the weather conditions were, the work was different. He assembled it for himself as he passed through it and for himself only.”

If you copy big chunks of the text and run a search through Google, you’ll find that this text actually comes from the book “Background Noise: Perspectives on Sound Art” by Brandon LaBelle. I’ve purchased it recently and there is a PDF excerpt of this chapter also available for free online.

This text gets into some of the specifics of the artwork – the location (“Lincoln Parkway in Buffalo”) and scale (“half-mile stretch”), the use of radio transmitters on a shared and colliding frequency, how weather and other environmental interference played a role, and the idea of the sounds “mixing” in unique ways as you moved through the space in a car with a radio tuned to the artwork’s station.

I suspect it’s a convention of criticism to talk about a singular person experiencing the art. But it strikes me as funny/wasteful and the product of another era to have the viewer by themselves in a car. At the very least, it’s a missed opportunity for sharing an experience with other folks. 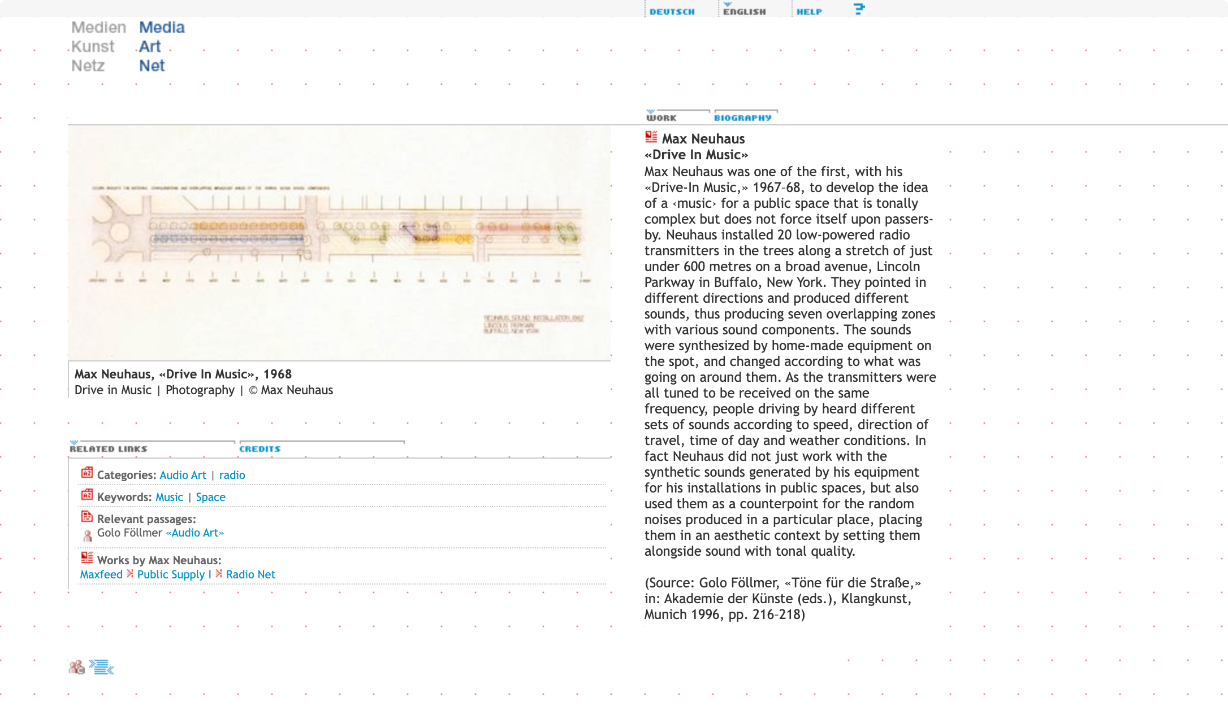 medienkunstnetz.de is a German website cataloging “media art.” In their own words, “Media art—by definition multimedia, time-based or process-oriented—cannot be sufficiently mediated in book form.”

The site was produced in the early 2000s. And it looks like it! I really like the vintage bitmap fonts and awkward multi-page essays. It makes me nostalgic for that era on the web. The “Help” page in particular is a gold mine of familiar interaction things we still reinvent quite badly today. 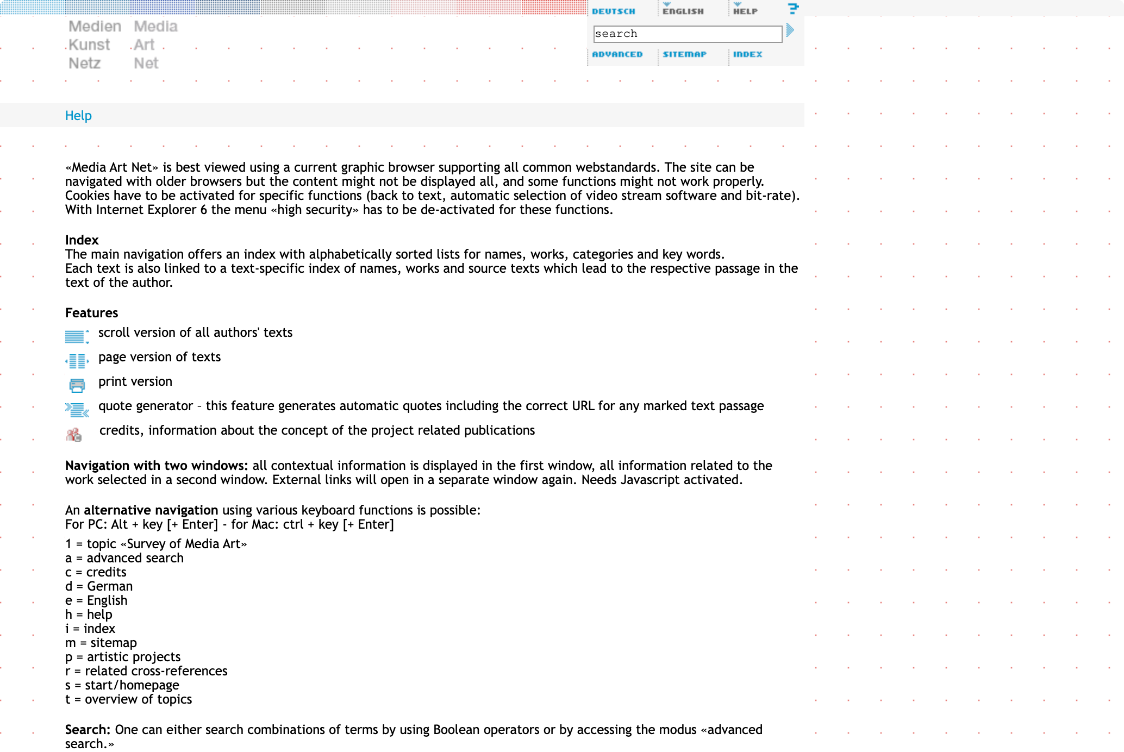 Still. There’s a wealth of detail on this site about Neuhaus, other artists, and the broader sweep of 19th/20th century sound art making. It’s great.

Max Neuhaus was one of the first, with his Drive-In Music, 1967–68, to develop the idea of a music for a public space that is tonally complex but does not force itself upon passers-by. Neuhaus installed 20 low-powered radio transmitters in the trees along a stretch of just under 600 metres on a broad avenue, Lincoln Parkway in Buffalo, New York. They pointed in different directions and produced different sounds, thus producing seven overlapping zones with various sound components. The sounds were synthesized by home-made equipment on the spot, and changed according to what was going on around them. As the transmitters were all tuned to be received on the same frequency, people driving by heard different sets of sounds according to speed, direction of travel, time of day and weather conditions. In fact Neuhaus did not just work with the synthetic sounds generated by his equipment for his installations in public spaces, but also used them as a counterpoint for the random noises produced in a particular place, placing them in an aesthetic context by setting them alongside sound with tonal quality.

— From “Neuhaus, Max: Drive In Music”, a page on the site medienkunstnetz.de

This description of Drive In Music is a bit more lyrical and a bit more precise about the mechanics when compared to the blog post on “C’est une sorte de panel.”

The passage is an excerpt and translation from Professor Golo Föllmer’s, “Töne für die Straße,” from 1996. I can’t find the full book in English online. Though, with a title like “Tones for the road,” I’d love to read it.

Here’s the diagram of Drive in Music on medienkunstnetz.de:

It’s slightly lower-res than the image of the diagram from max-neuhaus.estate. But it describes a larger physical area of the highway and provides some more clues about how the radio antennae contributed to creating the sound “zones.”